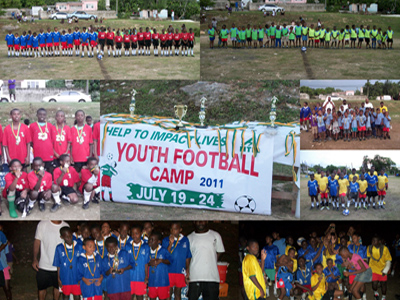 Similar to last year, soccer camp was capped off with three Youth All
Stars medal games (see all pics | slideshow):

An MVP trophy was awarded for each age group: the award was based on sportsmanship and playing ability throughout the camp session. The recipients were Tyrease Sammuels (Under 10), Kimani Robinson (Under 12) and Nicolas Maragh (Under 15).

Last but not least, three players vied for the most outstanding soccer-scholar
award which includes a trophy and a stipend of $200 USD: the players include
Damion Smith (last year inaugural winner), Denado Dinham, and Coby Dinham.
Eventually, (after report verification), Damion Smith won the award again.