On July 16, I met with several kids in my community. I had sent out words a few days back that they should come to the field that day. I took the opportunity to talk to them; I started by speaking to their interest – the love of their lives – soccer. 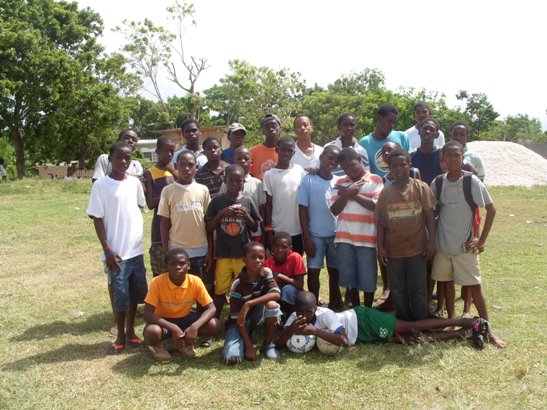 I expressed to them that couple decades ago I was about that similar age, with the same passion and playing on the same field. And like several of them, I didn’t have the bare essentials to play. So I played barefooted! Some were upfront to let me know that they want to play but just can’t play barefooted – because of the stony condition of the field. I genuinely expressed my interest in their social well being and subsequently told them that one of my main goals is to supply them with soccer resources so that they can play the sport of their passion.

Then, I revealed that my interest to help is beyond just playing soccer: it is about a using a passion as a path way to a profession (directly or indirectly). I did a quick poll about what they wanted to be and several of them wanted to become a footballer. I disclosed that that like many of them, it was my dream to become a professional footballer, but it didn’t happen; however, I got a soccer scholarship and now am a Software Engineer – something I didn’t dream about, didn’t know about, much less to become one. But this scholarship was my ticket out of poverty!

I informed them that it would be great if all of them who wanted to be a footballer turned out to be one – and a great one too. Also, I was frank with them and told them that the statistics are not in their favor, and that everyone should be thinking about an academic career – that school should come first. So just in case their non-academic dream doesn’t materialize, they will have something else to fall back on. And for those who didn’t fully understand how I got the scholarship, I emphasized that if I played soccer alone, it would not have happened; it was a combination of soccer and academics. Additionally, I raised the issue that about age 35, its unlikely for someone to play soccer professionally; so in their case, they would have to think about life after soccer.

I planted the seed of a marriage of school and soccer; I encouraged them to stay in school. I reinforced that I have a vested interest in their socio-economic wellbeing. Subsequently, when I finally collected their information – in addition to their name, age, shoe size and shirt size – I told them to tell me what they want to become; and if it is a footballer, they have to give an alternate career.

They started mulling over their future and it was very encouraging to see them putting things into perspective. It was all talk that morning – no play; but I gave them ‘play’ to look forward — I announced a 2 day soccer camp and the chance for some of them to play in an All Stars game.