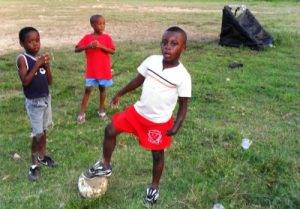 They say every cloud has a silver lining, and the day that dark clouds brought torrential rains and dejection, they (the clouds) also brought a silver lining.

On Sunday, Aug 1, the end of camp youth All Star Games were set to start at 3:30 pm. However, the games were never played: Just 15 minutes before the game, dark clouds invaded the bright sunny skies, and brought with them torrential rain accompanied by strong winds. It seemed like it wasn’t going to stop. It lasted for about 20 minutes and when it stopped, it transformed the dry field into big puddles of water.

Subsequently, to the dismay of several children who came out eager to participate in the All Star games, the games were postponed. A few kids hung around for another 45 minutes; by that time, the puddles disappeared, leaving a soaked field. I was about to go when I heard a little boy saying, “Let’s go play before I have to go home.” He seemed to be excited, so I stopped to watch the excitement unfold. Again, I heard the same boy complaining that he keeps falling. He was with three other kids, but he was the only one complaining. On close observation, I noticed that he was playing barefooted.

I called him over and asked him what happened to his shoes. He said that he only had a pair of sandals that he had put at the side of the field because he didn’t want to get them dirty. Immediately, I looked at his feet and said to myself, “I can help with that.” I had a few small pairs of shoes left. While I was in the process of asking him is shoes size, one of the other kids came over and said, “Onenie, come on, lets play!”

I asked him if that’s his name and he said, “That’s what they call me.”
I asked, “Why?”He took his left limb from behind him for the first time and pointed to the now obvious that his limb had no hands. He then explained that at age 3, he suffered burns from a house fire – scarring primarily the left side of his body and contributing to the lost of his hand; so they called him Onenie – for one hand.

I gave Onenie a pair of shoes. He put the shoes on and was beaming with enthusiasm. He went back to play, and there was no complaint after that – just sheer excitement. I stood there watching Onenie unleash his excitment. And with one hand and two feet, he kicked his way right into my heart. Yes, the rainny clouds had disappointed many (the children who came out to play and me), but as they say, every cloud has a silver lining – encountering Onenie was that silver lining.