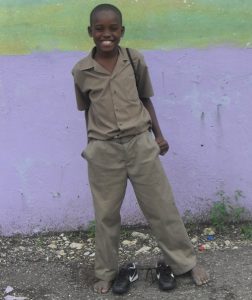 Eight year old Leonardo Dennis has not one but two reasons – a brand new pair of shoes – to smile. I visited my my former school, Barrett Town All Age School, and spotted Leonardo in flip flops. I asked him why he was wearing flip flops; he just looked at me, scratched his head and mumbled, “I have nothing else to wear”. (Flip flops are generally prohibitted, but given the circumstance he was allowed to wear them to school.)

Leonardo immediately became a candidate for a pair of turf shoes – shoes which were bought with the dual purpose in mind of playing soccer and wearing to school (for kids who have no school shoes). The next day when I caught up with Leonardo (to give him a pair of shoes), he had just returned from his lunch break; his dirtied bare feet were a result of him ditching his flip flops (in the classroom) at the expense of some fun – soccer. Now, he can ditch his flip flops at home, go to school and play soccer no longer barefooted.

If all I had was only one pair of shoes to giveaway, it would have served a most worthy need – Leonardo’s need!